Ashton Gate has become the first stadium in the UK to install a section of”safe standing” rail seating.

Bristol City FC, a confirmed supporter of rail seating, has installed a demonstration block of rail seating at Ashton Gate as an example of its benefits in a bid to give others an idea of what could be expected if legislation was changed. One of Blues Trust Board members, Paul Smith, attended the unveiling event at Ashton Gate last week. (See his comments below).

A spokesman from Bristol City FC said that if the Club is given the relevant permissions, it could be a great opportunity for Bristol City FC to become the first club in the Football League to install rail seating, as well as becoming a showcase for other teams up and down the country.

It was also said that there had been feedback from the supporters who are keen for the option of safe standing and, with the proposed redevelopment of Ashton Gate and Bristol Rugby’s move to the stadium this summer, it seems to be the right time to explore this further. The development may include rail seating in two of its stands subject to certain legal hurdles being cleared.

What are rail seats?

The block of rail seats at Ashton Gate, which cannot be used during matches presently, were unveiled last week in front of dignitaries from the FA and Football League as well as members of the national and local media. Initially the “safe standing” areas will only be used during Bristol Rugby matches held at the stadium as the current regulations prohibit their use for football matches.

If you want to see how the seats were installed, then please see this video :  http://youtu.be/uiZAZwG7_jQ

All-seater stadiums were compulsorily introduced to the top two tiers of English football following the Hillsborough disaster in 1989.

In many European countries, football fans are allowed to stand at top-level games, something which is not allowed at premiership and championship matches here in the UK.  Standing is currently allowed in Leagues One and Two.  But campaigners say they have come up with a system which will make it safe for people to stand on the terraces. 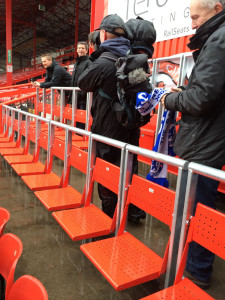 Following consultation with its clubs, the Football League has agreed to lobby the Government for a change in the rules to permit safe standing areas for football matches. Football League chief executive Shaun Harvey said: “Consultation has given us a better understanding of the wide range of views held by clubs on this issue and we will take our cue from the prevailing opinion.” At last week’s Football League meeting there was clear strong support from clubs for the League to approach the authorities for a relaxation and change in the regulations.

Campaigners, led by the Football Supporters’ Federation, hope this is another major step in the direction of the introduction of safe standing areas in England.

Jon Darch, of the Safe Standing Campaign, demonstrated the “rail seat”, which was unveiled last Wednesday.

He said “80 or so people attended and got to see the rail seats first hand and heard about the benefits that it is believed this new form of spectator accommodation will bring. The rail seats will be in situ now for the next 18 months.

We still have one or two regulatory hoops to jump through before we can definitely confirm that the rail seats will be installed in the redeveloped Ashton Gate, but we are very hopeful that we will be able to do so, thus providing the option to offer standing accommodation or to operate in all-seater configuration, as required by the rules and regulations for the respective sport/event being staged.

All being well, therefore, the first areas of rail seats for actual use rather than just for demonstration purposes should open at the ground in August 2015.”

Apparently half the clubs in the Premier League are interested in reintroducing standing at their stadiums and at least one has offered to conduct a trial of ‘rail-seats. Areas have been identified that could be used for a small-scale trial so the rest of football could see if it works within a Premier League environment. There are at least seven or eight clubs that have come forward to say they are also interested in furthering the debate.

Paul Smith, Blues Trust Board Member, said ” On witnessing the Rail Seating first hand, I firmly believe the introduction of Safe Standing will be a real boost to English Football and help to enhance the atmosphere that is currently lacking in English football matches.  The simplicity of the Rail Seating is a winner on its own.  On the continent, rail seating has a ratio of 1:2, which in theory doubles your capacity.  On speaking to our club , who I can confirm are 100% behind the introduction of Safe Standing , their only concern was the extensive remedial work that would be needed to install it e.g. gangways , toilets , exits etc . But my answer to that is don’t use the ratio 1:2;  go initially for 1:1 so we can experience and enjoy safe Standing at St Andrews.  Once safe standing is tried and more importantly trusted, we can put together a remedial works programme to slowly increase the capacity.

In my opinion, simple Safe Standing has to be introduced into English Football; choice of being able to sit or stand must return for the good of the game .”