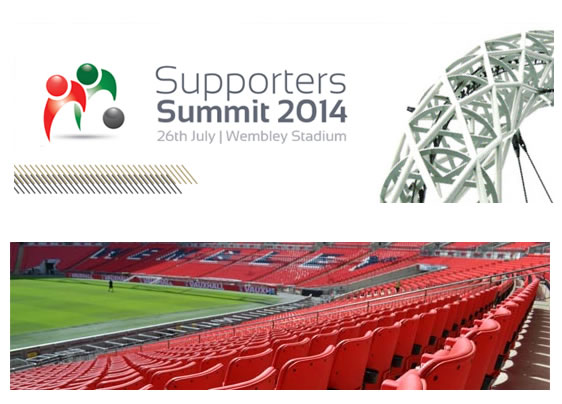 The Annual Supporters Summit 2014 at Wembley Stadium is a joint event by Supporters Direct (SD) and the Football Supporters Federation (FSF) aimed at bringing supporters together to discuss the challenging issues facing the industry.

The programme for the day will include sessions on how football can in the future introduce rules to protect club identity – highly relevant following the cases involving Hull City and Cardiff City, ‘Away Fans Matter’, continuing the season’s work of the FSF on the campaign, a session on Financial Fair Play in the UK and Europe, and Safety Advisory Groups – the all-seeing, though relatively unknown bodies who make many of the big decisions on matches.

Finally the event will include a ‘knockabout’ discussion and Q&A at the end of the day hosted by football magazine, The Blizzard.

Blues Trust would like to invite a fellow Birmingham City supporter to join members of the Trust board in attending this event, completely FREE OF CHARGE.

The Supporters Summit 2014 is for supporters of football, Rugby League, and other spectator sports clubs, whether individuals or part of supporters’ organisations. It is a great place to have your voice heard and learn more about how clubs are run, and about how the world of football and sport works.

The Summit provides a great platform to discover real-time fan issues as well as providing an opportunity to develop relationships between fans and the game’s other key stakeholders.  From Supporter Liaison Officers at clubs, to the regulators of the game’s finances, or anywhere in between, if supporters are relevant for your work, then you should be here.

As well as the Summit itself there will also be:
The FSF and SD AGM’s;

NB: The AGM’s will not overlap as they are scheduled so members can attend both if they wish.

Delegates will also receive a free Wembley Stadium Tour which gives you the chance to relive your greatest moments, and create some new ones, as you go behind-the-scenes at the most famous stadium in the world.
If you can answer yes to the following criteria:

then please email us your expression of interest at: info@bluestrust.org by 5.00PM Friday 30th May when 1 person will be selected to attend.

We look forward to hearing from you.