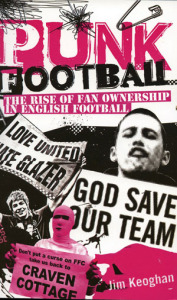 Punk football only shares one thing in common with the music scene from which it derives its name and that is its do-it-yourself approach. This book provides a summary of the fan ownership movement, outlining the way that some supporters moved from being just very loyal customers and became stakeholders, with a say in how their clubs are run. It is essential reading for anyone interested in the movement that gave birth to AFC Wimbledon and breathed new life into Swansea City. It explains the rationale behind supporters trusts such as Blues Trust.

In 1992, Northampton Town supporters set up a trust to raise money to save their club and to secure a say in the way it was run. Before that, fans of other clubs had raised money to help their clubs survive financial crises but the Northampton Town Supporters’ Trust was the first fans group to use the money to buy a share in the club. They got two seats on the board and a say on how the money was spent.

When the Football Task Force was set up in 1997, it looked at the Northampton trust and decided it was a model that could be used at other clubs. This led to the establishment of Supporters Direct in 2000, whose mission is to promote sustainable sports clubs based on community ownership and supporter involvement.

It is clear that the author believes in fan ownership but this doesn’t stop him from telling the stories of clubs where things didn’t work out so well. At one stage the Notts County Supporters Trust owned enough shares to give it majority control and three seats on the board. But the trust sold its shares to new owners who promised investment that would take the club to another level financially. What they got were owners who turned a sustainable business into one that owed £7.5m. The Stockport County Supporters Trust also failed to overcome the obstacles they faced and took their club into administration. At York and Brentford, supporters found ownership of their clubs a greater burden than they were able to carry but both trusts maintained some influence.

The book is well written and provides an overview of the successes and failures of punk football. It tells how supporters can save clubs from extinction, bring new clubs to life and hold owners to account and it does this without trivialising the difficulties faced.