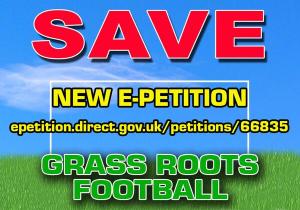 We would like to draw your attention and encourage you to take part in an e-petition to HM Government, created by David Crausby MP that you can view at the following link. He is calling on the Government to ensure that grass roots football receives financial support from the Premier League. The petition requires at least 100k signatures so that it can be considered for discussion in the House of Commons. At the moment, there are just under 13k signatures.

For your convenience, David’s website article is reproduced below:

“On 22nd February 2013 I launched a campaign to secure funding for grassroots football.

The first year of the campaign started a real discussion about the future of football from the bottom up. More than 30,000 people signed my petition calling for the Premier League to put more money into grass roots football and this has become a real topical issue.

The campaign was re-launched on 3rd July 2014, with a brand new petition on the Government’s website http://epetitions.direct.gov.uk/petitions/66835

The cuts imposed by the Government on Local Authorities across the country mean that football is feeling the effect. I’ve heard stories from around the country about ordinary families unable to pay rising subs, poor quality pitches and an absence of decent changing facilities.

I think that it would be unreasonable to demand that councils put more money into football at a time when such difficult decisions are being made, but I still think that it is important for our country so we must look for alternative revenue.

When this campaign started The Premier League had just signed a deal for their broadcasting rights over three seasons that is worth £5bn. Clearly there is money in football, but it is being concentrated at the top. I don’t want this cash boost to be wasted on even higher wages for managers and players, it’s time for the Premier League to give more back to the grassroots.

I’m calling for just 7.5% of this money. The Premier League already give 4-5% so this wouldn’t be a radical difference for them, but it would make a huge difference to children up and down the country and help to open up the sport to everyone.

Why is this important?

Children up and down the country benefit from being able to take part in organised football. It’s not just good exercise; it teaches them important life skills like team work and helps them to build friendships. I don’t want children to miss out on the chance to take part.

The Premier League continues to grow in popularity around the world and inspires many children to get active and play football. It must be right for us to ask the Premier League to share its success with the families that help make that success possible.

If we can reach 100,000 we can have this issue considered for a debate in the House of Commons. That would be a real sign to the decision makers in football that the public want change, that there is real grass roots support to save grass roots football. It will also help to raise awareness among MPs and Government Ministers so that they can add extra pressure. It’s going to take a lot to overcome the vested interests at the top of the sport, but I think we can do it.