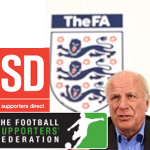 A joint delegation from the two national football supporters’ organisations – the Football Supporters’ Federation (FSF) and Supporters Direct (SD) – met with representatives of the Football Association Chairman’s ‘England Commission’ last week to discuss the content and recommendations of its first report.

Below is a copy of a joint Press Statement released on 29th September 2014 by FSF and SD.