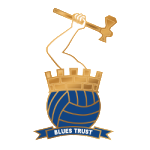 The trophy was supplied by Neil Grant of Crescent Silver in Birmingham’s Jewellery Quarter and he was there to see Clayton receive the trophy that he and several other Blues supporters had made. After the training session, players signed autographs and posed for photos with fans, who all seemed to be enjoying the occasion.

There is a slideshow of photographs below.