At the beginning of March, David Boston, the Supporter Liaison Officer for Birmingham City Football Club, advised various Supporter Groups that if they wished to do so, they could attend St. Andrew’s on 6th April to present end-of-season awards to players.

The Blues Trust decided that was something we wished to do and, accordingly, members were invited to vote for their Player of the Season. The winner was Mikael Kieftenbeld and we were delighted to present him with the trophy on Wednesday following a training session held at St. Andrew’s.

The trophy was kindly presented by Robert Hughes CBE, a founder member of the Trust.

A number of awards were presented by other groups and there was an opportunity to obtain autographs and photographs and talk to players after the training session.

The Trust’s trophy was again supplied and specially crafted by Neil Grant from Jewellery Quarter firm Crescent Silver, who have made many famous sporting trophies over their 100-year history. The Trust would like to pass on its special thanks to Neil who is a lifelong Blues Supporter. 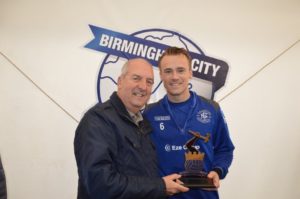 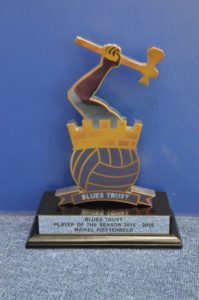 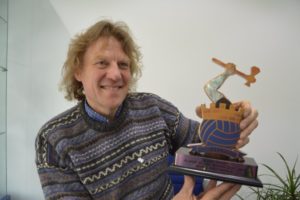 The trophy was made by “Bluenose” Neil Grant at Crescent Silver