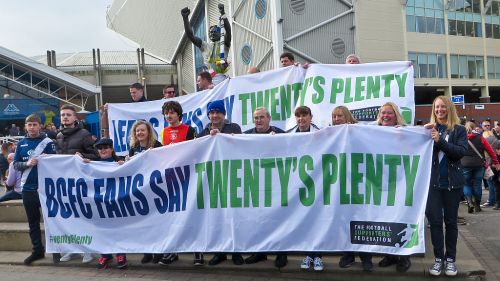 Fans fighting in France make more dramatic headlines than stories about friendship among fans. But all football supporters have interests in common and networks of fans do work together. Blues Trust has links with supporters of other clubs through its membership of Supporters Direct and we have shared Birmingham City’s tales of woe with fans of other clubs who have had dodgy owners.

Supporters Direct led on the work to get structured dialogue between clubs and their supporters included in the recommendations of the Government’s Expert Working Group on Supporter Ownership and Engagement. The English Football League has announced that from next season “clubs will be required to hold at least two meetings/fans forums with a representative group of the club’s supporters.”  Blues Trust welcomes Birmingham City’s statement indicating its intention to comply with this requirement. David Boston, the club’s Supporter Liaison Officer, introduced quarterly meetings with registered supporters’ groups last season and is seeking additional fans representatives next season.

Blues Trust is also affiliated with The Football Supporters Federation. One of the things that FSF does is to support fans in trouble. It has people in France to provide assistance to British fans at Euro 2016.  They have a page on their website with fan guides, emergency contact phone numbers and news updates. Their campaign, Watching Football Is Not A Crime! is part of their “ongoing drive to monitor the police in their dealings with football fans and work with them to ensure that all fans are treated fairly and within the law.”

There will be a Supporters Summit at Wembley on July 16th, organised by Supporters Direct and The Football Supporters Federation. It’s on a pay-what-you-want basis this year so it’s a great opportunity to meet with other fans and have a look round Wembley. It’s the place to be if you agree that fans should work together.