Some poor shooting at St. Andrews 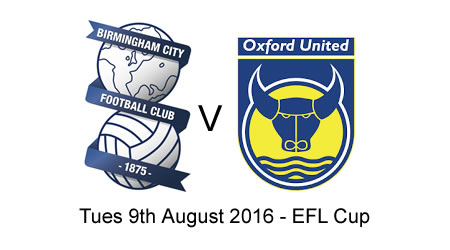 118 goalless minutes will never set the pulses racing, but the common assessment of Oxford’s 1-0 win at Birmingham as a dull game may be a touch unfair. The main issue for both teams was poor shooting, as much as a lack of creativity. Both teams got into some decent positions over the course of the match, but did not test goalkeepers Adam Legdzins and Simon Eastwood often enough.

An even contest was to be expected, with no discernible gap in quality between the line-ups. Michael Appleton fielded 10 of the players that started Saturday’s 1-1 draw with Chesterfield whereas Gary Rowett made nine changes from the goalless draw with Cardiff. The Blues starting eleven featured a nervous Josh Cogley, as well as Viv Soloman-Otabor and Jack Storer, who both showed plenty of energy but little end product. Paul Caddis was unsuccessfully trialled on the right wing while left-back Jonathan Grounds has often been the brunt of criticism. Centre-back Paul Robinson was among Birmingham’s better performers on the night and he’s 37.

Given the weaknesses in Birmingham’s makeshift line-up, Oxford always had a chance. The impressive Curtis Nelson has been one of the best centre-backs in League Two in his time at Plymouth, while John Lundstram and goalscorer Liam Sercombe formed a quality midfield partnership last term. Youngsters who have just come through a Championship club’s academy are arguably at a disadvantage when faced with those who have established themselves in the lower leagues.

It is unsurprising therefore, that Oxford started almost as if they were the favourites. They played open, probing, possession football, often using the excellent Chris Maguire, who put a free-kick just wide of the post on 25 minutes. Birmingham were willing to allow the U’s the ball for long spells and hit them on the counter-attack. James Vaughan forced a point blank save from Eastwood, who was found in fine fettle. The hosts improved in the latter stages of the half, Oxford losing the tempo of their attacks when ex-Blues striker Wes Thomas came off to a good reception from home fans.

There was a lack of intensity in midfield, perhaps related to a shortage of numbers in the middle of the park. Oxford lost some energy in the second half and therefore operated a bit narrower than they had earlier on, with Birmingham trying the direct approach. Technical aspects of Jack Storer’s performance left a little to be desired, but he had the work rate that replacement Clayton Donaldson did not. The tall striker often slowed play down and with Vaughan not the quickest either, Blues did not have enough momentum in the final third.

Oxford came close before the end of the 90 when Kane Hemmings touched Maguire’s ball onto the post, while Dan Crowley looked bright in his substitute appearance. Oxford looked the more likely side to score in extra-time and Sercombe’s late header sent them through to the 2nd Round of the League Cup. Appleton’s men have still not lost an away game in 2016 and have beaten five higher-division sides in the last twelve months. It was a 120-minute game of just the one goal, but there could have been more had either side brought their shooting boots.

Gabriel Sutton – as published on The Football Lab