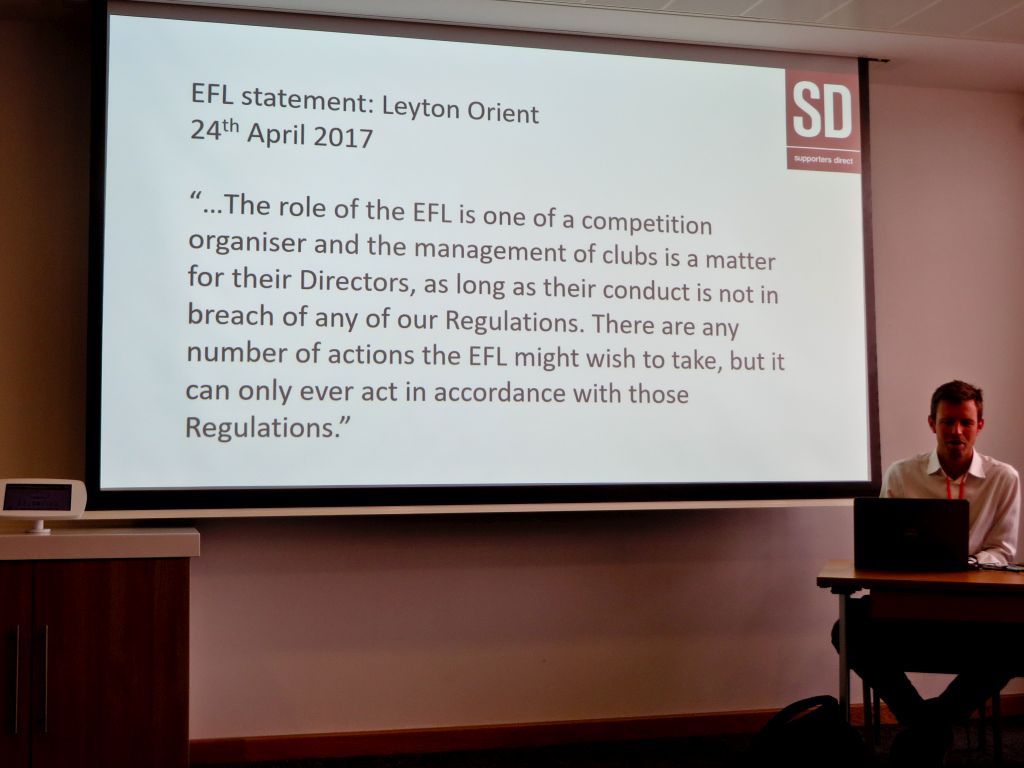 I came away from the Supporters Summit at St George’s Park, with a renewed belief in the need for better regulation of football clubs.

The opening plenary was on crisis clubs. Leyton Orient, Coventry and Blackpool fans told us about their experiences with owners that demonstrated the inadequacy of the Owners’ & Directors’ Test. The English Football League have acknowledged this in their statement on 24th April, which said:

“There has been significant comment in recent days about the EFL’s Owners’ & Directors’ Test in the context of the ownership of Leyton Orient. It is important that supporters understand that the Test governs the eligibility of who is able to own a club – it does not also ensure that those individuals have the capability to manage it properly.
The role of the EFL is one of a competition organiser and the management of clubs is a matter for their Directors, as long as their conduct is not in breach of any of our Regulations. There are any number of actions the EFL might wish to take, but it can only ever act in accordance with those Regulations.”

When Francesco Becchetti bought Leyton Orient in 2014, it had just lost a playoff final and failed to get promotion to the Championship. When he sold the club last month, it had just been relegated to the National League. He had no understanding of how to run a football club, had eleven different managers and didn’t pay local suppliers.  That club now has a new owner and new hope; the nightmare continues for Coventry and Blackpool fans.

After that opening session, I went to a workshop on regulatory reform and we discussed what could be done to prevent such situations.  It was agreed that we need a new independent regulatory body as the English Football League cannot prevent unsuitable owners buying clubs. It tried to stop Cellino buying Leeds due to his tax conviction but that was overturned by a QC and Cellino was able to complete his takeover.

Talking about governance and regulations was not as easy as listening to the stories of the clubs in crisis but I believe that it is necessary.  I’m interested in the long-term future of my club and I think that better regulation is needed to ensure that it does have a future.  That’s why I belong to Blues Trust.

Mauricio Pochettino leaves Paris St-Germain after 18 months in charge
5 July 2022
Richarlison: Tottenham's new signing to miss first Premier League match after flare incident
5 July 2022
The players with a point to prove this season: Pogba, Alli, Van de Beek, Mitrovic
5 July 2022
Kelly Smith column: Why England must embrace Euros challenge
5 July 2022
Euro 2022: Who makes your best England team this summer?
5 July 2022
BSH: Not The Announcement You Are Looking For
1 July 2022
BCFC: The Impending B-Day
29 June 2022
BCFC: Don’t Panic About Future Funding
24 June 2022
BCFC: Talking Takeovers IV
22 June 2022
BSH: Announcement Analysis
15 June 2022
We use cookies on our website to give you the most relevant experience by remembering your preferences and repeat visits. By clicking “Accept All”, you consent to the use of ALL the cookies. However, you may visit "Cookie Settings" to provide a controlled consent.
Cookie SettingsAccept All
Manage consent