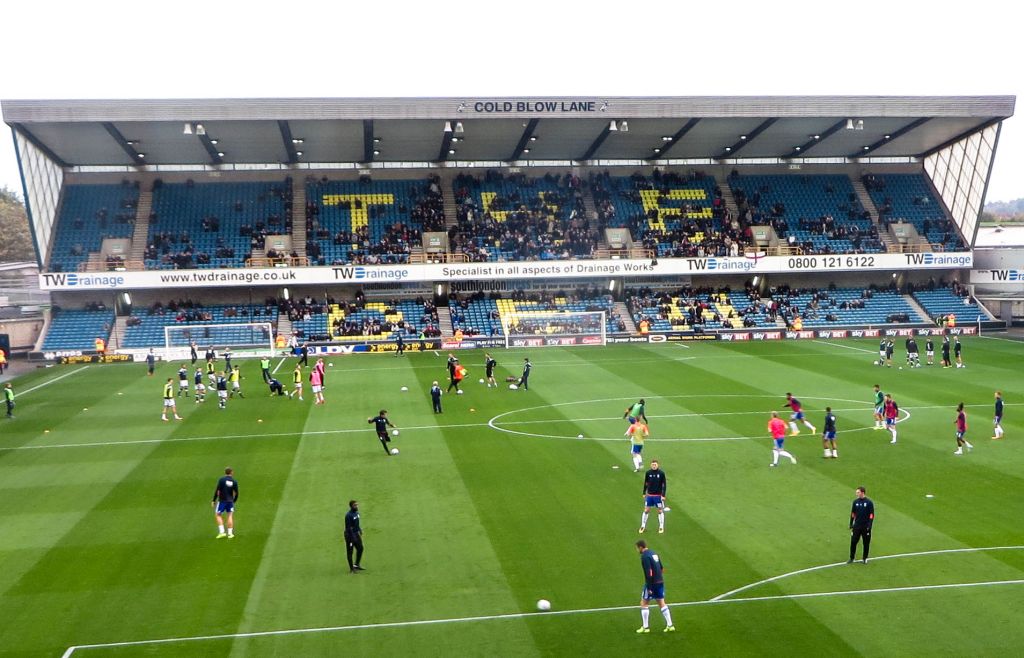 I went to the game at Millwall on Saturday and want to write about what happened off the pitch. Please note that I’m writing about what I saw. Birmingham City sold the full allocation of 2,083 away tickets for this game so there were a lot of other Blues fans there; some of them may have seen more and had totally different experiences. Also, the police may have treated me differently to some other fans.  I suspect that when police look at me they don’t assume I’m a football hooligan who might cause trouble; they are more likely to think I’m a harmless old lady who might need help.

I went to the Den early and didn’t see any trouble before the game.  There was a massive police presence at London Bridge railway station and a line of police dog handlers keeping a tight hold of their barking dogs. It all seemed over the top as we walked past them to get on the train to South Bermondsey.  The railway police were putting Millwall fans in the coaches at the back and Blues fans and other commuters at the front of the train. Apart from the police dogs, everything seemed pretty relaxed.  The line of policemen waiting for us at South Bermondsey also seemed relaxed and friendly when I checked with one of them to make sure I went the correct way.  They have two walkways from the station to the stadium: one for home fans and one for away fans.

After the game, the stadium announcer informed us that away fans would be held back and advised us to remain in the concourse, which I did.  I heard some shouting from the fans outside but nothing that sounded like a riot. Then I saw a group of riot police dash past, followed by some mounted police.  When we were allowed to leave the stadium to walk up to the railways station, several Blues fans stroked the horses as they went past and their riders didn’t try to stop this.  It didn’t feel as though the police thought we were a dangerous mob.  Several Blues fans, including me, stopped to talk to the police and one policeman told me he was sorry that they had come at us like that but that they had to follow orders.  I got on a train about 8.30 pm and, at London Bridge, we were greeted by the line of barking police dogs.

I think it was crazy to start the game at 5.30 pm. The extra time that fans would have for drinking made the police very nervous and, in my opinion, those in command over reacted.  I’m sure that some fans were drunk and misbehaved but I don’t think that the behaviour of a minority justified the display of ferocious looking dogs.  I think that provoked fans rather than calmed them down and it would have been better to keep the dogs in the cars unless/until needed.

I hope everyone got home safely. If you feel you’ve were unfairly treated by police, contact Amanda Jacks on 07703 519555 or amanda.jacks@fsf.org.uk. She oversees casework at the Football Supporters Federation and has successfully challenged many examples of unfair treatment. The FSF monitor the police in their dealings with football fans and work with them to ensure that all fans are treated fairly and within the law.  Click here to read about their campaign: Watching Football is Not a Crime!