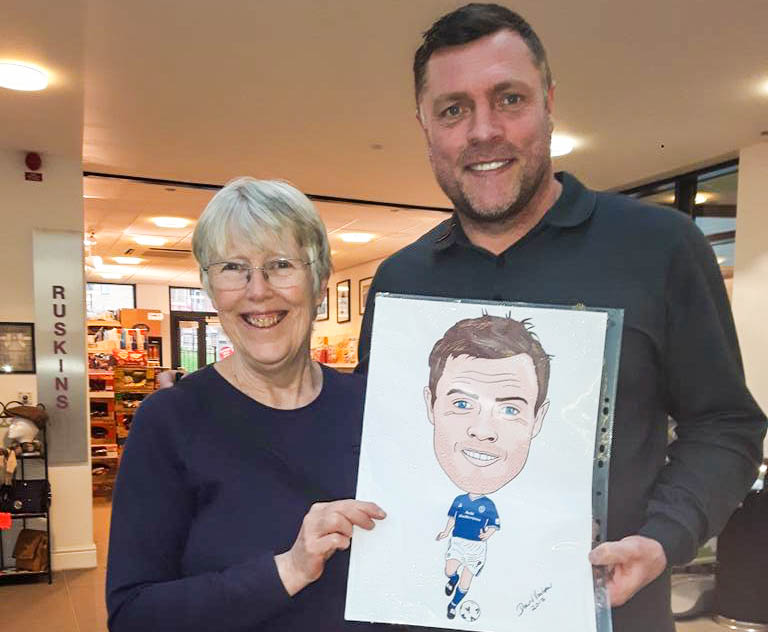 During the discussion at Blues Trust AGM, I proposed that we should support a charity and that charity should be the Geoff Horsfield Foundation.  This Foundation provides quality, safe and secure supported accommodation for vulnerable adults within the West Midlands Area. After reading about it, I felt that it was a good fit for Blues supporters.  It supports people who’ve suffered misfortune; some cope by using drugs or alcohol, and, at times, behave badly – surely Blues fans can empathize with that!

Since then, I’ve met Geoff Horsfield and am even more convinced that it’s something worth supporting. I made the winning bid for a cartoon of Geoff in a charity auction run by Debbie and she arranged to deliver it on Monday afternoon.  She brought Geoff as well as the cartoon and he gave up some of his time to talk to me. He doesn’t just raise money for his foundation, he works for it, fixing up the houses and interacting with residents. He mentioned buying takeaway Chinese for residents who had done well at looking after their house and how grateful they were. He couldn’t stay too long as he needed to go and change the locks at a house.

Members present at the AGM were in favour of supporting the Geoff Horsfield Foundation and I hope the rest of the membership will also agree.  We don’t have the membership or resources to do a lot but can publicize their work on our website and advertise their fundraising events.