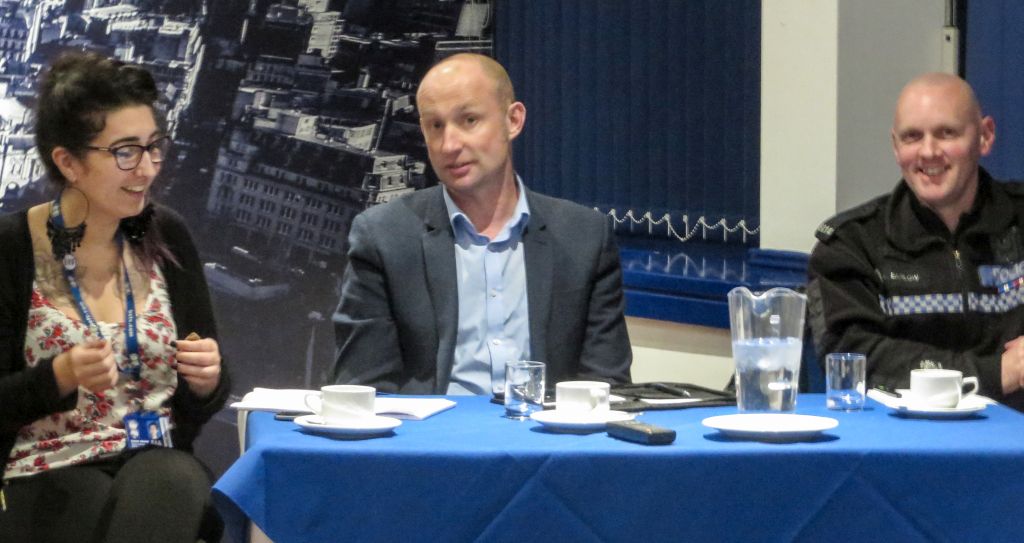 Yesterday evening, Sgt Mike Wilkinson and PC Colin Barlow met with some Blues supporters to talk about the policing of Birmingham City games.  The main purpose of the meeting was to discuss arrangements for the game at Villa Park in February.  Supporters who went to the game there last season agreed that the arrangements had worked well and similar arrangements are planned for this season.

There will be a charge for coaches to the game; a lot of people who had booked seats on the free coaches last season didn’t turn up. They hope to have two trains to Witton for fans going to the game. Details of the arrangements will be published nearer the date.

There was also some discussion on the away games at Millwall and Wolverhampton, and the home game with Aston Villa on October 29.  Mike Wilkinson said that the police were releasing 74 images to the press, in an effort to trace people who had been observed behaving dangerously at the Aston Villa game. He stressed that they were not going after fans who had thrown clappers or sworn at the referee; they were trying to find people who had thrown coins or bottles or had been involved in other violent conduct. Mike Wilkinson said that the police do not have an agenda against football fans and would prefer to work with them. They would like to reduce the number of police at games but cannot because the behaviour at Birmingham City games had got worse recently.

I felt that the meeting was worthwhile and both policemen talked frankly.  I don’t think that the West Midlands Police are perfect but, let’s face it, neither are Blues fans.  Police and fans talking together is a good idea and can help improve the policing of games.