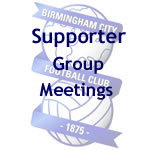 Blues Trust will be represented at the quarterly Supporters’ Forum today (Tuesday 27th February), which is the Club’s chosen method of meeting with its fans to satisfy its minimum engagement requirement.

It may interest supporters to know that English Football League (‘EFL’) legislation around supporter engagement  (‘Rule 112’) stipulates that the minimum standard expected of League members is that “…..clubs must be represented by the majority owner, board directors or senior executive management” at two supporters’ meetings a year. It is also expected that they must be willing to discuss “matters of a strategic nature”, as per the Government’s Expert Working Group guidance.

To date, no senior executive member of the Birmingham City board has been present at the meetings and, despite our repeated efforts, there has been no opportunity to discuss matters significant to the strategic future of the Club.

The following questions were submitted in advance to the Club and we look forward to receiving clarification. We are certain that supporters will agree that these relate to significant issues which are causing much anxiety around the Club, and thus that each deserves a comprehensive and satisfactory response.

At the last meeting we enquired if supporters’ groups are considered stakeholders of Birmingham Sports Holdings (‘BSH’) and whether we could join the share option scheme. Your representatives were unable to answer on the night and promised to ‘ask Hong Kong’. Do the club have a full answer for us yet?
We saw very little incoming activity during the last transfer window. What are the reasons for this? Please comment on the speculative suggestions below:
In the light of the significant losses warning for BSH on the Hong Kong stock exchange, what are the high-level plans to ensure that we operate within Financial Fair Play regulation. How will we increase revenue, reduce the wage bill, and avoid a fire-sale of our best players?
How are the following people connected with the club?
Blues Trust, whilst very supportive of the supporters forums, have notified the club a number of times that it has concerns that it is not fully complying with EFL rules on supporter engagement because strategic and financial matters are not addressed in any depth at forum meetings. Does the club have any intention to implement any of the options regarding improved fan engagement offered in the publication “Engage” published by Supporters Direct – for instance, fan representation at Board level, or facilitation of a face to face meeting with Board personnel?

Keep an eye on our Twitter feed to keep abreast of developments.

If it transpires that these questions are not answered comprehensively – or even at all – then we will be looking for our fellow supporters to help us to ask them again and again, and keep asking them until we receive the answers the fans need to hear.

Finally, we would like to make it explicitly clear that the Trust remain extremely supportive of the day-to-day staff at BCFC, and would like to offer our praise and thanks for their fantastic efforts under incredibly difficult conditions. Our concern lies only with regard to the obvious difficulties at Board level which are having a detrimental effect across the entire Club.