Seven straight defeats smashed into touch with determined aplomb and a rare clean sheet to boot. The temperature inside St. Andrews on Saturday may have been sub-zero but Blues were red hot.

I don’t want to speak prematurely as it’s very early days of Garry Monk’s reign but his team produced the sort of football that his predecessor, Steve Cotterill, tried to convince us wasn’t possible with the players he’d inherited.

To his credit, Monk has been consistent with his view to the contrary. From the moment he walked through the door, he has been adamant that his players are capable of finding the net. While Blues’ have come up short in the final third for much of the season, they’ve also lacked a manager with genuine belief in his troops.

Defeat under Cotterill was usually followed closely by the rationalisation that sounded something like “we don’t score goals, we didn’t score goals before I was here, so please don’t blame me”.

Take away a workman’s tools and he can’t build. Similarly, when a team struggles to create chances and finds goals hard to come by, playing with such a negative system is counter-productive. One solitary strike feeding off scraps, wide players deployed so deep they may as well be full backs and defenders visibly under instruction to bypass the midfield by hoofing the ball. And all of this while the most creative players sit on the bench kicking their heels.

Monk has simplified things; two strikers supported by two wide players with a license to attack. It’s breathed new life into the players. Jota is finally starting to impersonate a club record signing, Che Adams is putting his injury woes behind him and making things happen and Lukas Jutkiewicz is causing havoc. 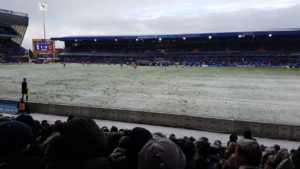 A cold and snowy St. Andrews

Jota’s first goal of a cold, snowy and blustery afternoon was merely the starting point in what was an energetic and bright performance. But for Allan McGregor’s heroics in Hull City’s goal, it could have been a cricket score at half time.

Adams, who was a handful throughout, added  Blues’ second with a cross-come-shot that sailed all the way in and Jota added the third and his second of the match to bag the points.

Monk has made some bold decisions since taking the reigns but giving the nod to 21-year-old Wes Harding at right back, when it would have been easier to stick with the unflattering but more experienced Arsenal loanee Carl Jenkinson, paid dividends.

With eight games remaining, danger is still lurking but Saturday’s imposing 3-0 win was a huge step in the right direction. The only thing guaranteed in this life is death and taxes. And while Blues may not be out of the woods, Monk has given the fans hope by the bucket load.