“Well that’s another fine mess you’ve got me into”

I know many fans are somewhat perplexed about Financial Fair Play (FFP), and that is being polite. There seems to be anger, resentment and a feeling of unfairness amongst Bluenoses; the sense that we are being picked on (while Villa get away with it). It’s also clear that the opacity about the process – from both club and EFL – makes this worse.

To me, this boils down to 2 elements. Firstly understanding the rules and how they work. Secondly understanding where we are and where we need to go. There is a third element to this for many people i.e. where other clubs stand – especially the Villa. I’m afraid I’m not going to cover this third element in any detail because I haven’t got time and being frank I don’t think it’s relevant – this is about us. What I will say is that from my background reading, Sheff Weds are in similar levels of hot water to us and Villa will be if they don’t sort their act out (although not until the end of this season at the earliest – remember they’ve had parachute payments).

So, element 1 – understanding the rules. There’s a series of tests, brilliantly explained here

In summary clubs can lose £15m over 3 seasons in “cash” or £39m if the owners fund the extra £24m of losses by buying shares. It looks to me like we’ve lost a total of around £37m over the last 3 seasons but with no shares having been purchased to cover any of the losses. So we’ve broken ALL the rules and COULD have the book thrown at us. That is the top and bottom of it. 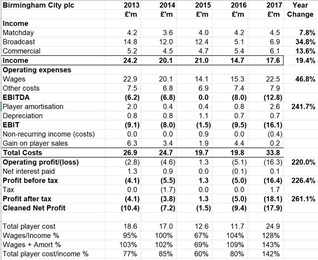 @KieranMaguire (who’s a lecturer in Football Finance) posted a summary financial spreadsheet on Twitter which many of you will have seen (the brilliant @almajir has also covered this).

The last 2 years on the sheet are relevant. We lost c. £21M over 2 seasons (15/16 and 16/17). It appears that in 17/18 (based on my extrapolations of another @KieranMaguire tweet) we will have lost in the region of £25M, largely thanks to Redknapp and Dein. Add those 3 years together and we’ve lost £46M (although around £3M per annum of that comes off for “allowables” such as youth development, community schemes etc). Hence my estimate of a £37M FFP loss – or thereabouts.

But here’s the rub. Because our owners didn’t buy shares to fund any of the losses the 3 season limit is only £15M in total losses. If they had bought shares we might have been OK because it looks like we would have snuck under the £39M limit which applies when losses are covered by share purchases. I’ll leave you to judge whether or not those in charge did or didn’t fully understand the FFP rules but it does seem odd that we put the cheque book away in January and appear to have kept losses to just below the £39M limit, only to realise that that limit doesn’t apply to us because we didn’t buy any shares……

So, we’ve been naughty (or incompetent), got caught and will get done. What now? Element 2:

Well, the club appear to have a plan of sorts. The problem is (and there’s more guesswork in these numbers) that while things will get better financially as our losses going forward will be reduced, we’re reliant on the board to do something that so far they’ve been very reluctant or unable to do i.e. fund losses by buying shares.

This season the picture is better but still not good. I think (based on more guesswork) that the players who’ve already left – mainly returning loanees – will benefit us to the tune of about £5M savings in wages. The players slated to leave next (Stockdale, Grounds et al) should double that. Our income has been growing slowly but steadily due to higher crowds, a better TV deal and good performance by the commercial department but even if this continues it only makes a small dent – maybe £1-£2M. Finally the stadium naming rights will help by about half a million. Add that all up and our loss for this season might come down to £10M after allowables if we can shift Stockdale et al. This is still way above the £5M “cash” loss allowed per season. Looking even further ahead, only N’Doye is out of contract at the end of this season so the picture for next season (19/20) isn’t much better.

So what’s the solution – how can we get back to a situation where we can invest in better players and move the club forward? If I was running the club (ha!) this would be my plan:

In summary – and we all know this anyway – we are paying the price for last summer’s excesses. The best we can hope for is a continuation of form and results under Monk (and the rejuvenated St Andrews which has gone with it), mid-table safety and owners who’ve learned from their mistakes. In the longer-term we probably have to accept that with average gates of just over 20,000 qualifying for the play-offs or promotion would be a very big achievement indeed. In Garry we trust………