Review of 'Where did it all go wrong' - The thoughts of one of our members. They are the opinions of that person and not necessarily those of Blues Trust.
Something to get off your chest? Do you have an idea for an article? We’d like to hear from you.

Where Did it all go Wrong? The Story of Football in the West Midlands is an interesting read about how West Midlands clubs have been managed and why local clubs have failed. Some chapters are on general issues and some are on the history of Aston Villa, The Blues, West Bromwich Albion, Wolves, Coventry and Walsall. The author is John Samuels, an Emeritus Professor of Business Finance at the University of Birmingham.

The Blues chapter illustrates how my club conforms to the new way of running football clubs. When Bill Shankly managed Liverpool, he had the power to buy and sell players; now managers are bought and sold like players. Samuels writes,

“All the evidence is that a manager needs in the region of 2 to 3 years to have a significant impact. But with so much money at stake most of the modern owners are not prepared to wait that long for results. This leads to a breakdown in the traditional leadership structure. Now 35% of management dismissals are the result of a breakdown in relationship between the manager and the owner (or the Chairman).”

The book was completed in July 2018, before Garry Monk was sacked but it does cover Gary Rowett. Trillion Trophy Asia (TTA) sacked him a couple of months after they bought the club in October 2016. When Monk arrived in March 2018, he was the fifth manager they had appointed.

Samuels says that Birmingham City, “had been run into the ground” when David Sullivan and the Golds bought it. They invested money and rebuilt three stands but by 2001 some fans were saying the club needed owners “who would show more commitment” and Sullivan said he and the Gold brothers would accept £16 million for the 78% of the shareholding they owned in the club. They didn’t find a buyer at that price but three years later Carson Yeung bought the club. He paid £1 per share, which valued the club at £81.5 million, about three times what it was worth. Yeung was a football fan but not a good businessman.

The section on the early history of Blues outlines many problems from 1875 to the Sullivan era.  A quote from Doug Ellis’ autobiography about his time as a BCFC director says his experience at Blues taught him “exactly how not to run a football club”.

The chapter on globalisation and inequality points out that the increase in inequality in football mirrors what has happened in all walks of life. He quotes David Conn’s prediction that “Every decision will be made solely on the basis of whether it will make money for the already rich”. The success of football as a business has benefitted the elite clubs but not those lower down the pyramid. Some of the best players in the world have played in England, but not for clubs like Birmingham City. Birmingham City’s owners do not have the wealth to compete with the top Premier League clubs. So the club is unlikely to achieve the kind of success that would promote the image of the city whose name it bears. 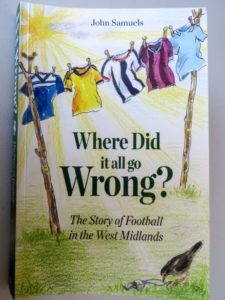 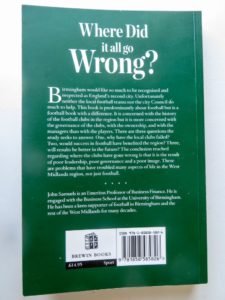