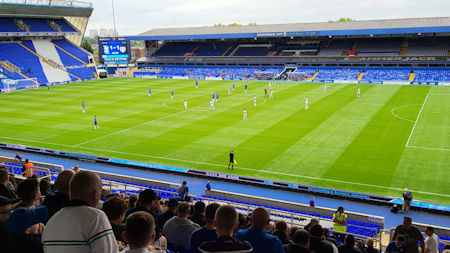 New season and first up Luton Town away. Forty six league games to get through and hopefully most of those will produce a significant improvement compared to previous seasons of very moderate returns. That’s putting it kindly. My real hope is for our current manager to be successful, as not only do I like him but I feel he is a good fit for the club at this precise moment.

John Eustace needs support, however, and not just from the fans. But from his players too, and certainly those that are experienced. Again that’s putting it kindly. This manager has gone out of his way to praise the elder players for their attitude in training and support during the short time he has been here, with complimentary remarks about the likes of Deeney, Hogan and Dean.

However it is the Dean comment which intrigues me most as Eustace refers to him as a leader and is keen to get him back in the reckoning. That is a major statement compared to Dean’s standing at Blues in recent months. Also Deeney’s recent comment stood out for me, referring to the bookies fancying us for relegation this term, therefore giving the players great motivation to prove them wrong. And, of course, Deeney stressing how hard but enjoyable training has been and referring to life under the new manager as good.

All very pleasing to hear but let’s see these elder players produce performances on the pitch. John Eustace has a good crop of young talent to call upon and there is little doubt that a few will be valuable assets to the club in this new season. We know who they are and we know our past history, which doesn’t auger well with keeping them at St. Andrew’s.

However, a good season could change the philosophy under Richardson and co. giving the club a better chance of success. Flickers of hope are what we as Blues supporters feed on, and we now look to our prospective new owners and manager to get the club in good shape. John Eustace and the players have said all the right things during the build up to Saturday. It’s now down to reality. Hold on to your hats at Kenilworth Road and fasten the seat belts. It’s  time to get started.