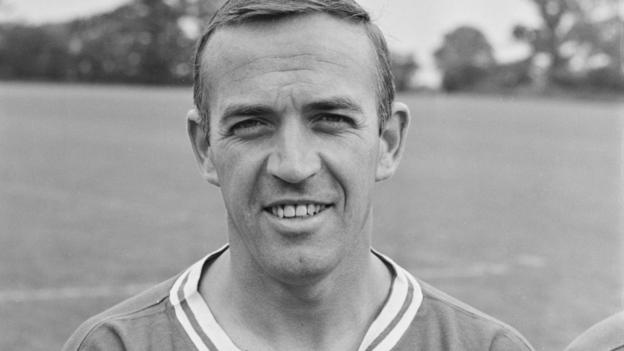 I started watching Blues in 1967 and the first Blues captain I saw was Ron Wylie who sadly passed away last week, aged 86. Ron epitomised everything you’d want from a team captain – leadership, drive, commitment and skill. Born in Glasgow in 1933, he’d started his career with Clydesdale Juniors before joining Notts County as an inside-forward in 1948 before joining our friends over the Expressway in 1958.

He joined Blues in July 1965, just after we’d been relegated to the old Division 2 – by then he’d converted into a powerful central midfielder. Some suggested that he was past his best when he joined us – nothing could have been further than the truth. He’d been voted Midlands player of the year in 1965 and went on to spend 5 seasons at Blues before retiring at the age of 37. During that time he was a consistent performer- winning the ball, holding it and distributing it intelligently – and an inspirational captain, leading us to an FA cup semi-final in 1968 against West Brom, beating Arsenal and Chelsea on the way (He’d missed the league cup semi final with QPR the year before through injury). In all he played 149 games for Blues, scoring twice.

Although he’d played for Scotland schoolboys he never gained a full cap – probably due to the other high quality Scottish midfielders around at the time. Off the field Ron was approachable and friendly – I still can still recall the excitement of two of my ten year old classmates who met him watching Sunday league football and got his autograph in 1967.

After leaving Blues he went into coaching at Coventry City and then abroad before returning to the UK to manage West Brom for a couple of years. Sadly for him this was unsuccessful and he later returned to coaching, scouting and community liaison officer work in the Midlands.

Although he only spent the tail end of his playing career with Blues he created a very positive impression in that attractive cup fighting side of the late 60s and is fondly remembered by Blues fans of that era. RIP Ron.