The idea of a supporters trust for fans of Birmingham City was first mentioned by Daniel Ivery on his ‘Often Partisan’ website on 27 July 2011. He published two posts about it. Click on each section below to reveal the history of each event.

So, the news broke. Blues are officially in the toilet financially, and whilst administration hasn’t been discussed by the board (and I’m told is not in the equation in the medium term), it’s going to be a bit of a firesale at St Andrews.

Naturally, this has caused much anger, worry and bitterness amongst Blues fans, and I don’t think it’s inconsequential that the number of people looking to protest against the board and the owners has risen rapidly today. I’ve been quite vocal about my opposition to the idea of direct action against the board, and with the new information that has come into the public domain I thought it was time I offered an alternative.

A Supporters Trust is an organisation built by fans on democratic principles to give themselves a legitimate voice in the running of their club. Birmingham City have in the last twelve months been active in helping the supporters clubs grow and become an active part of the club itself, but an umbrella organisation is needed so that when times are hard, there is a focal point for people to rally behind. It also can do things like buy shares in a football club – which then give fans a real say in how it is run; get fans appointed to board room level to ensure that the club doesn’t lose touch with it’s fanbase, and most importantly give a united voice which can influence media reporting on the fans.

It’s not like it’s hard to start either. Supporters Direct is an Industrial and Provident Society (ie not for profit) set up by the Government to help build supporters trusts and to make sports more accountable and democratic with respect to the fans.  Their website gives a useful handbook in how to set up a supporters trust of your own for your club. Instead of shouting platitudes whilst holding placards, this is a chance to actually do something that the club – and more importantly, the owners – cannot ignore.

It’s something that is going to take commitment, and I will state here and now that if fans want to be involved I will offer my help in setting this up. I have no desire to be the public face of Birmingham City fans whatsoever, but I do have the desire to do something to give the long suffering Blues supporters a proper outlet to vent their frustrations, and to help build a dialogue with the club. I’d also say here and now that my personal opinion is that the aim of the Supporters Trust should not be to force Carson out; but to build a better dialogue between the board and the fans; to force the board to be more open and accountable in their dealings and to take a stake (as in shareholding) in the club. I understand the high feelings regarding Mr Yeung et al, but without a financial white knight on the horizon we’re going to have to deal with what we have and it’s better we work together to make things right than pull the club apart.

If people would like to get involved, please email me – almajir@oftenpartisan.co.uk – and hopefully we can get the ball rolling. If Blues fans are going to push for a better club, we have to do it in a proper way, and use the system that is set up. Together, we can do it.

I’ve read lots of comments by Blues fans, and most of it does seem positive. It’s not about disenfranchising other groups, or creating a talking shop – a Supporters Trust is about legitimising fans groups and giving them all the chance to have a voice that can’t be ignored by the club. The whole democratic ideals behind an ST would mean it can’t become someone’s private fiefdom, and that those who speak on behalf of the fans would actually be mandated to do so by the fans who have elected them.

I’ll be keeping abreast of how the Supporters Trust idea grows, and I hope to be able to report their initial meeting in the near future.

Fans responded to the idea and a meeting was arranged and held on August 13th, 2011 at Phoenix Community Centre.

I’ve received this today from the fans who are setting up the Supporters Trust:

The first meeting of the Blues Trust was held at the weekend to discuss how fans of the club may improve their say in how the club is run.

Blues Trust, made up of a cross section of Blues fans, aims to create a Supporters Trust along the lines of those successfully employed at clubs such as Swansea, which is now 20% owned by its fans. Supporters Trusts are run along not-for profit and democratic lines and the intention and should it be successful, will buy club shares and see fans represented on the Blues board.

‘the current uncertainty over the club’s finances and future has highlighted the need for fans to take a more direct role in how Blues is run.

“The Supporters Trust offers fans a vehicle to increase their profile at the club and work with the board through the current uncertainties.

“As the Trust will be democratic, co-operative and not-for-profit, we aim to make a fundamental difference in how the club is run and the way it interacts with the fans.”

A public meeting for Blues fans to hear more about the Trust will be held over the coming weeks. 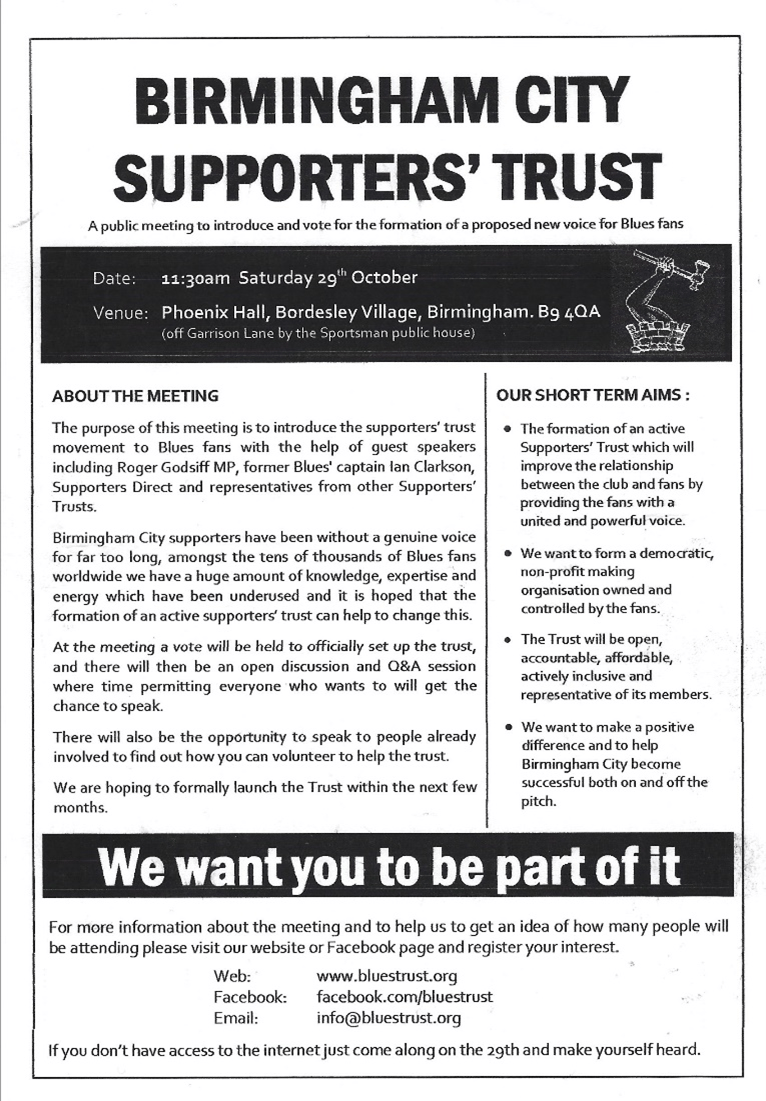 The meeting was held because the steering group had contacted Supporters Direct (SD) and been told that they needed to show that Blues fans were in favour of setting up a supporters trust. At this meeting, they explained what a supporters trust was. Those present voted to set a trust up for Birmingham City FC. After that, with help from SD, the steering committee got the rules registered with the Financial Services Authority (which later became the Financial Conduct Authority). The rules were registered on 21 February 2012.

The steering group continued to work on setting up the trust and deciding on some details in the rules. They were told by SD that registration might be refused if they used the club’s name without permission from the club and the club said they’d have to get permission from China. It was decided not to use the club’s name but to call the organisation Blues Supporters Society Limited. The leaflet reproduced on the next page provides a summary of what was said at the April 7 meeting. 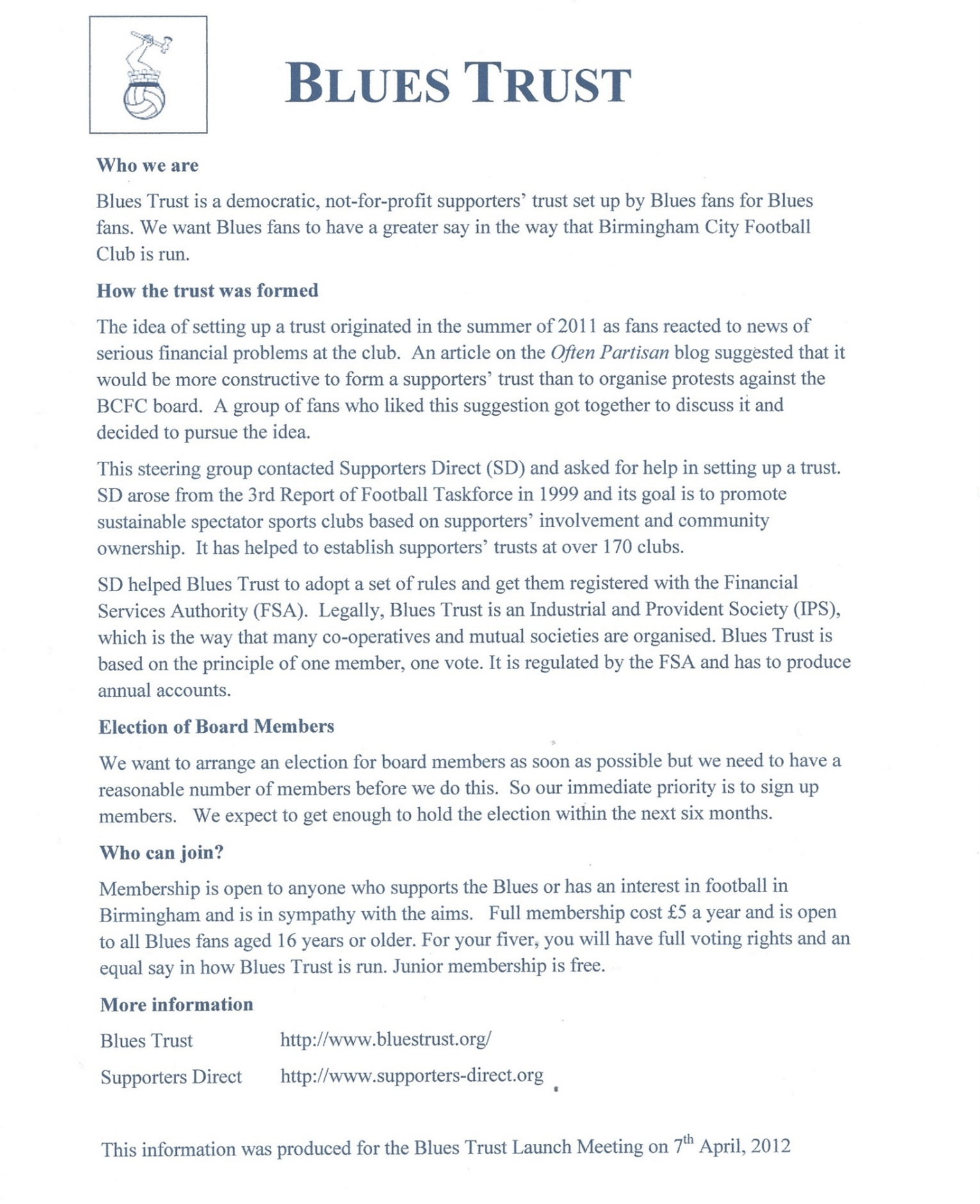