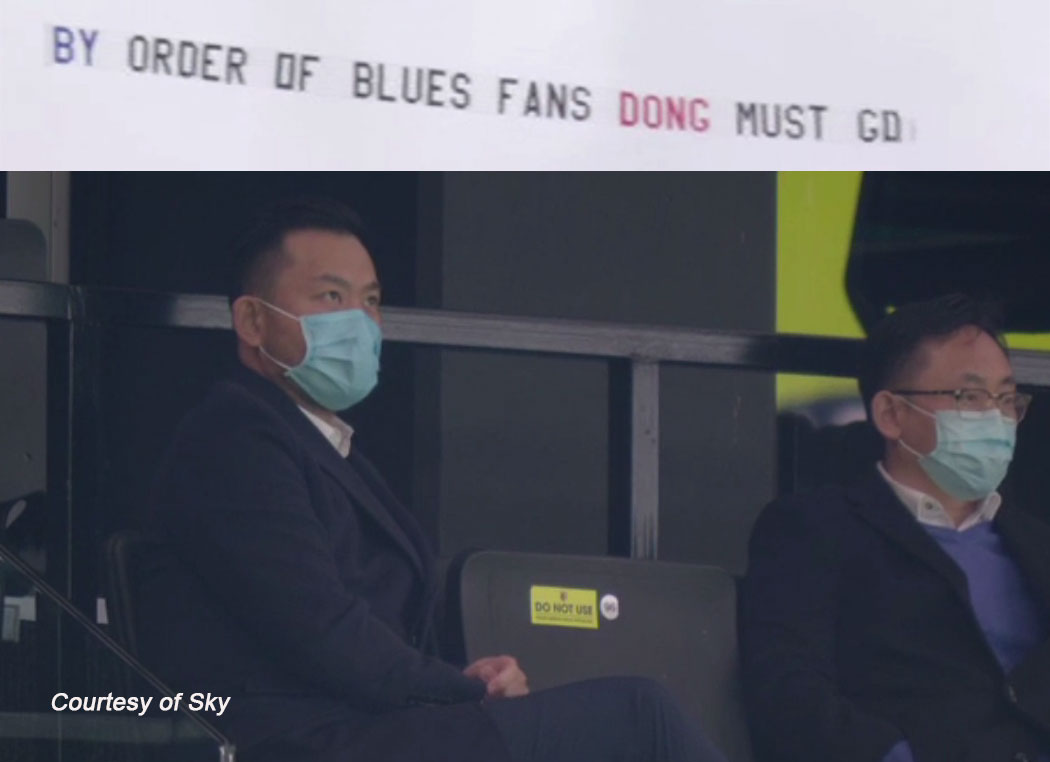 Following on from the protest above Vicarage Road on Saturday, here is an article with permission of and published by ‘Joys and Sorrows’ that you can view on their website entitled ‘Plane Speaking’.

There have been many articles written over the last couple of weeks about the situation at Blues, but it would be hard to find one which better expresses the views of so many Blues fans. It leaves you with the thought ‘I couldn’t have put it better myself’. We would encourage as many Blues fans as possible to read the article. For other articles by Joys and Sorrows, here is a link to their website.

“ On seeing the plane soaring in the sky above Vicarage Road on Saturday afternoon, my first initial reaction was one of huge relief for the pilot. It was in the air for a good length of time, but Marc Roberts still managed to avoid knocking it out of the sky with one of his passes.

Of course, that is a statement made very much with tongue in cheek. Really, the whole thing could not have gone any better. Sky Sports beamed the images across the country, and instantly afterwards also screened the reaction of Ren Xuandong viewing the message telling him that he must go. His facemask covered his mouth but in his eyes and the twitching of his fingers you could see his discomfort as clear as day.

His discomfort was great to see because the more discomfort he feels in his post week after week then hopefully he may well end up walking. Hopefully he is feeling uncomfortable now and realising how much more uncomfortable he will feel when fans are actually allowed back into St Andrews. If he isn’t inclined to leave his post of his own accord, hopefully his paymasters are feeling embarrassed enough to end up forcing him out.

Dong is now getting a taste of the medicine that has been dished out to members of staff at the football club on a recurring basis over the past few years. Members of staff working across all departments and across all levels of the football club who have left the football club in the last few years. In some cases the people who have left in the last few years have served the club for decades, people who have served through all sorts of strife down the years who simply couldn’t take anymore. They have had their lives turned upside down because of how the club has been run, and it simply has to stop.

I wasn’t involved in the direct planning of Saturday’s stunt and I am no spokesperson for the people who organised the stunt or any of the other protests in recent weeks, but I give them my wholehearted thanks and congratulations and am willing to support them in any way I can. Thanks because these people are enacting what the vast majority of Blues fans have wanted to happen for a long time now. Congratulations because these stunts are attracting attention from press and public alike all around the country; these stunts are shining a light on how this club has near enough been destroyed in recent years. I think that the majority of Blues fans will be offering their support one way or another as well.

The battle the fans have in forcing Dong out off the pitch is just as important as the next eight battles the players and management face on the pitch, if not even more important. That man has to go, and he has to go as soon as possible. The pressure he is feeling is starting to feel relentless and must remain relentless. He cannot be allowed to wriggle off the hook again.

There is nothing positive to say his tenure at all, absolutely nothing. His incompetence has been the single biggest direct cause of the decimation of this club. The first-team, the academy setup, the women’s team, the administrative staff, the recruitment setup, the multi-million pounds of debt; wherever you look around the club, you can see how this club has regressed and how it has been substantially destroyed. He couldn’t even go through a fifteen-minute interview with a local journalist recently without causing a meltdown at the Stock Exchange. It’s a big statement to make, but it is arguable that his appointment as the CEO of Birmingham City Football Club is the single worst thing ever to happen to the club.

Naysaying from some Blues fans against these protests is baffling. Those espousing dissent against these protests are very much in a minority, but they are still making their (online) voices heard. This list below isn’t exhaustive, but here are a few disparaging comments and assessments I’ve seen online and my response below:

“The plane and these stunts in general are “cringey”:

I’ll be honest I think it is a lot more “cringey” that we are staring down the barrel of League One football, playing in a stadium we no longer own (that the fans may not even be able to re-enter even post-lockdown) and are weighed down by millions upon millions of debt (amongst many other things).

“That these protests are the sorts of things that Villa fans do”:

If I was a Villa fan I’d be wanting Blues fans to do nothing, to let this man stay in post as long as possible. I’d have been spending the last few years laughing at the circus that is open 24/7, 365 days a year at St. Andrews, and I’d be rubbing my hands at what may be coming next whilst Birmingham City is run in the manner it has been in the past few years.

“Targeting Dong may impact the players and the coaching staff”:

Utter rubbish. These players and the new Manager and his staff know exactly who the sole target of these protests are (I’m reliably informed that at least a couple of players are tacitly offering support to the cause). That is another thing that the organisers of these protesters can take credit for; the clear, concise nature of the messages being put out there means there is no real room for confusion as to who the fans back and who the fans want sacked.

“That these protests have been organised by a select few people who haven’t consulted the
fans on a wider scale“:

For these protests to be effective, the decision making has had to be contained within a small group. The larger the circle of influence the harder it would be to ever achieve a consensus on what to do, how to do it and when to do it. The more people brought in to be involved in decision making, the less chance there would have been of anything getting done.

Ren Xuandong’s departure won’t instantly cure all the club’s ills. For starters, a plan needs to be put in place for how the fans can influence his successor being somebody competent. It’s a simple enough message to the owners of the club; if you want your money to be spent wisely and to have a return on investment, if you want the club to move forward in the medium to long-term, then you cannot simply appoint another person from your close cabal to come in and run the club. You have to have somebody in place who has the experience and the nous to run the club properly. It’s a simple enough message, but the most effective way of getting it across to the owners has to be figured out.

But we can be sure of this – until Dong leaves then this club has no hope of moving forward. We will simply be facing Groundhog Day over and over and over again, and this club will be spiralling into footballing abyss. It is now as clear as day that for the club to ever again have any hope of flying as high as that plane did in Hertfordshire on Saturday a fundamental change in how the club is run has to be forced now.