Fan engagement should cover all aspects of the club (different fans are interested in different aspects) and there will be some detailed matters that do not lend themselves to consultation with fans (e.g. individual transfer dealings). The match day experience / ticketing / merchandise etc. are areas where fans’ opinions are easily sought and taken on board (really just good marketing). Issues such as changing the club colours / badge / ground and location are clearly issues fans hold dear and should be subject of consultation and fans views taken into account. The long-term sustainability of the club is also very important for most fans, however this is an area that many owners / directors are uncomfortable engaging with fans over as it requires discussion around club finances, strategy and business plans, confidentiality and commercial sensitivity is often cited by these owners as reasoning for not engaging in these matters.

The Government’s Expert working party in 2014 investigated fan engagement and agreed with EFL and other governing bodies that structured dialogue should be the minimum level of engagement. The diagram below is taken from a document titled ‘Engage’ (produced by Supporters Direct  – now Football Supporters Association) which describes in much more detail the levels of engagement possible. 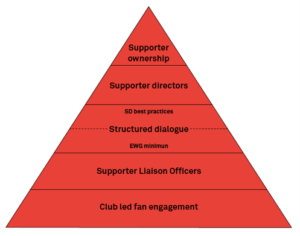 The lower end of the engagement pyramid is club led and the top of the pyramid recognises fan ownership and control as a governance model. Fan ownership in higher value clubs is probably unrealistic (more on this in the separate governance article). There are examples of good and poor practice across the clubs, however enforcement by the EFL of even the minimum level of engagement has not been evident.  This allows clubs that do not value fan engagement to pay it lip service.

Engagement through fans forums is good for discussing match day experience type topics, however a smaller group with agreements around confidentiality is usually better for the more sensitive discussions regarding finances and ownership.

Moving forward, the Trust believes that the existing ‘Engage’ document is a sound basis for future engagement. We initially propose that clubs are required to progress on an engagement journey up the pyramid within a timeframe (say 3 years) that results in fan representation at Board level. In addition to the current documentation, we would seek that new regulation includes a broad list of topics where engagement is required to include those referred to above and also how the club and supporters can enhance the reputation of the game by having policy and implementations that supporting national initiatives such as ‘kick it out’. We believe that having diversity and anti-discrimination policy and initiatives within an engagement framework is an opportunity to embed and make real these issues that still need addressing.  Of course, this would require regulation and enforcement to succeed – this brings us to the topic of independent regulation that will be discussed in a separate article.

What are your thoughts?

We would like to know whether you feel fan engagement is necessary, welcome or not worth the effort and what you think about how fan engagement might work into the future.

Please send your thoughts to fanledreview@bluestrust.org no later than 5 June 2021.

Join Us
By making comments on the above article, you agree to Blues Trust retaining your email address should we need to make contact with you for admin purposes.   Let us know at admin@bluestrust.org if you do not wish us to do this.  We will not give out your email address to any 3rd party sources.